The ship is incredibly clean and the staterooms – cabins are spotless. Eveything is thanks to stewards and the cleaning personnel.

During the second day on the ship we met the steward responsible for our cabin. It is a cheerful and helpful young man from Java, Indonesia.

We talked a little bit and asked him a few questions. We found out that to work on the ship you sign an eight-month-long contract so you are at home very rarely. The saddest thing was that he (our steward) said he had no other option but to work here on Carnival Glory.

During lunch, I had a chat with another nice, young man this time from Uzbekistan. He was an accountant by profession but here on Carnival he was supposed to clean the tables after guests.

Life is unfair, world is constructed in such a way that very often people with connections achieve a lot. Knowledge and skills do not seem to matter. Besides there is this fu…ing gap between the rich and the poor countries. Very often modest and well educated people serve and clean after those who were simply born in the “right” part of the world.

The people from my country – Poland also experience this division. The Polish work in whole Europe and the jobs they have are low-paid.

We also found out that stewards and other “lower” staff even do not have access to the Internet so they go ashore to have contact with family.

While you are on the ship, you can either do the washing youself or you can have it done for you.
When you do it yourself, it costs $7 for washing, drying and using a detergent.
When the service does it for you, you are charged $15.
Ironing is charged separately, it is $20 for 12 pieces of clothing. Of course you can do it for free on your own.

The laundry rooms are on each deck and they are never busy or occupied.

Me and Marcin were a little bit afraid of experiencing seasickness. Fortunately, it turned out that we worried unnecessarly.
We aren’t bothered by the rocking or shaking and the crusing is rather smooth.
On 25th of August it was a little windy but the ocean/sea was rather calm.

The service on the ship is excellent. Every crew member always smiles and is willing to help. Maybe it is because they have to or maybe they want to.

One thing is sure, when you have a problem the people will definitely do their best for you.

Carnival Glory is enourmous and when you enter on board you may feel a little bit lost, however, after a couple of hours the ship becomes your home and you know quite a lot about it.

There are 14 decks on Carnival Glory (however deck number 13 does not exist because it is unlucky). Deck number 9 called LIDO DECK is the one most often visited by us and by the majority of passangers. Here everyone can have breakfast, lunch and dinner, enjoy the sweet, fruit and ice-cream corner, as well as cold and hot beverages. Here one can also order a pizza, buritto, hamburgers, fish and chips and sandwiches. Actually, the food is available for 24 hours a day and there is too much of it.

Late dinner is also served in restaurants for example on decks three and four. We have a table in a restaurant Golden Upper on deck four.

Restaurants are connected with high quality service. Here you are given a menu and are served by a waiter. Sometimes you have to wait longer to be served and the meals are relatively small but they are very delicious.

On Carnival there is also an option to have brunch. It is served from 8:30 to 1 pm on the third deck in Platinum Restaurant. Here one must wait to be seated and then gets a menu.

One depressing thing is the amount of food which is wasted. People have a tendency to put on their plates lots of food because it is very appealing and tasty. Unfortunatelly, they leave lots of food on their plates which is later thrown away. They do not realize that there are many places all over the world were people do not have the food at all and die of hunger.

The amount of food is also connected with obesity. Majority of people are extremally overweight and they keep eating non stop. All those people experience health problems and simply kill themselves because of overeating. 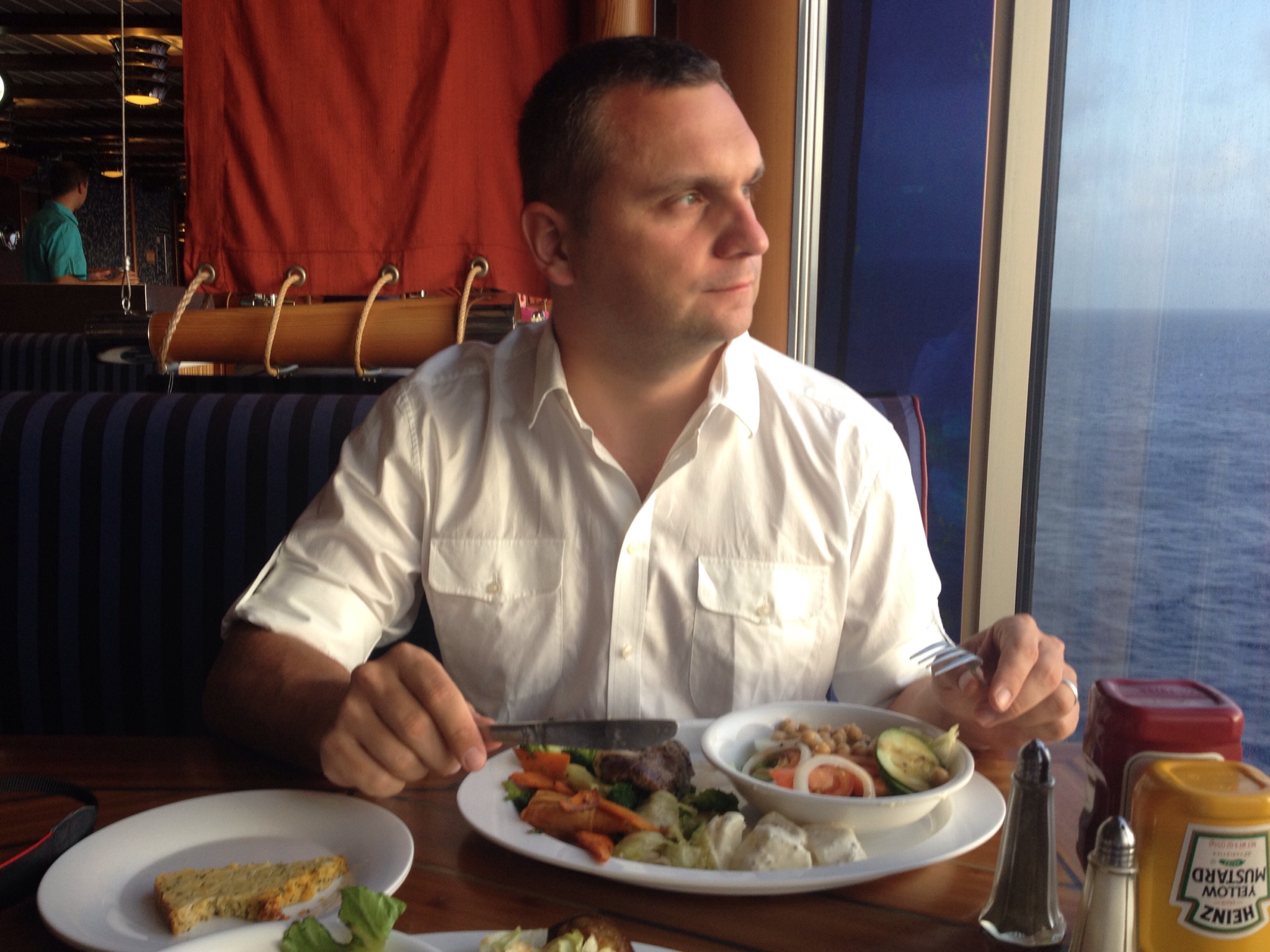 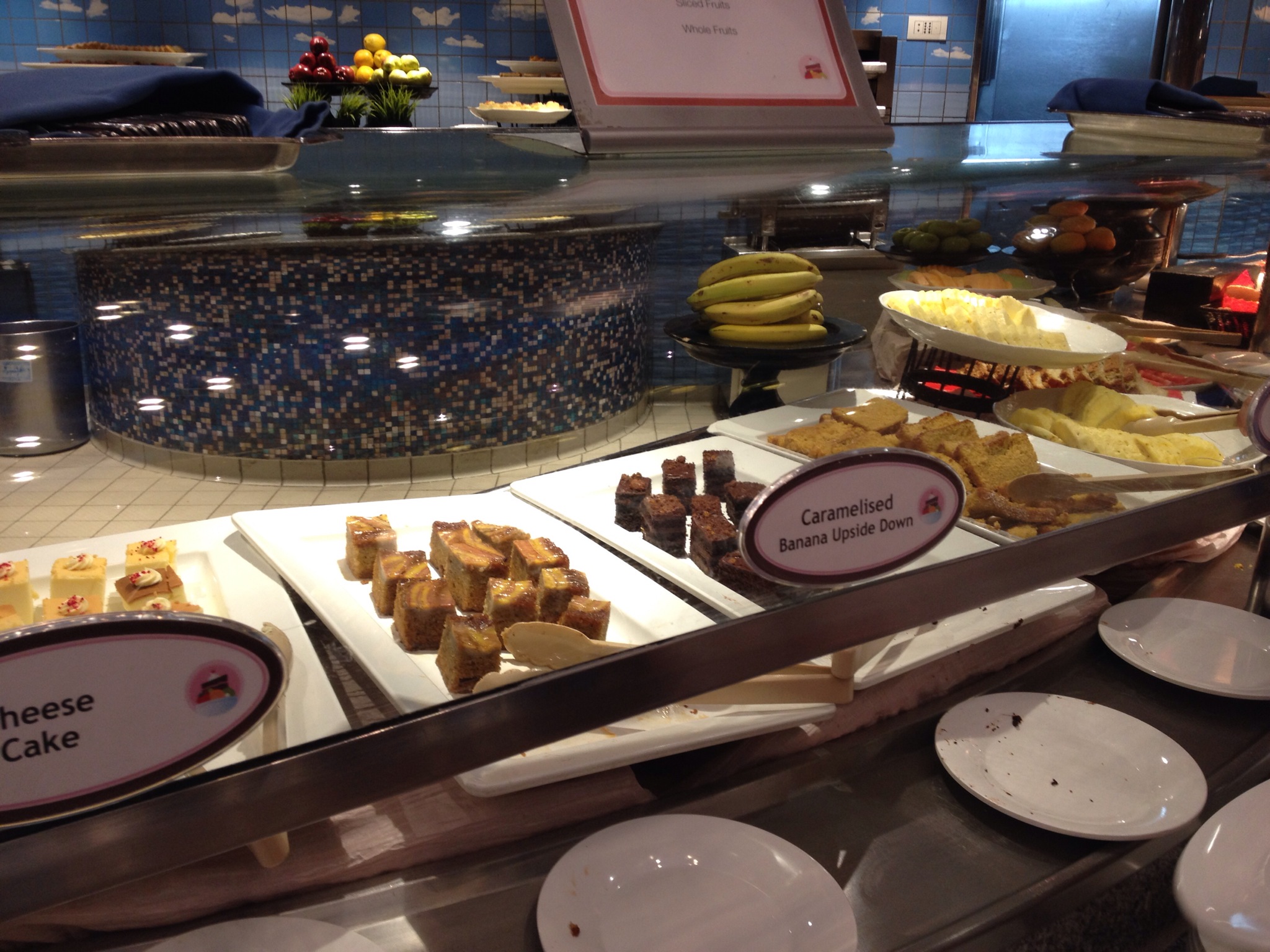 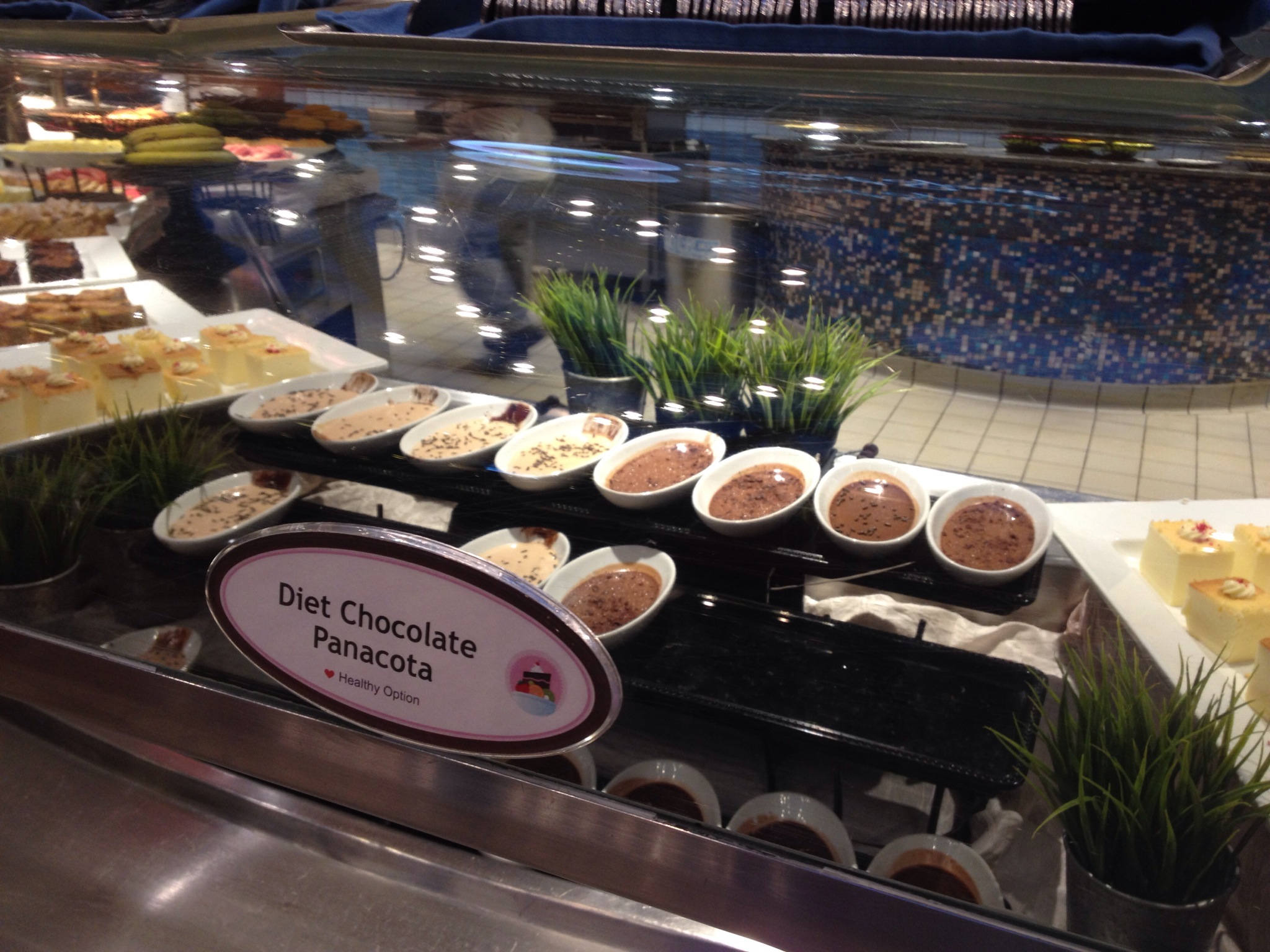 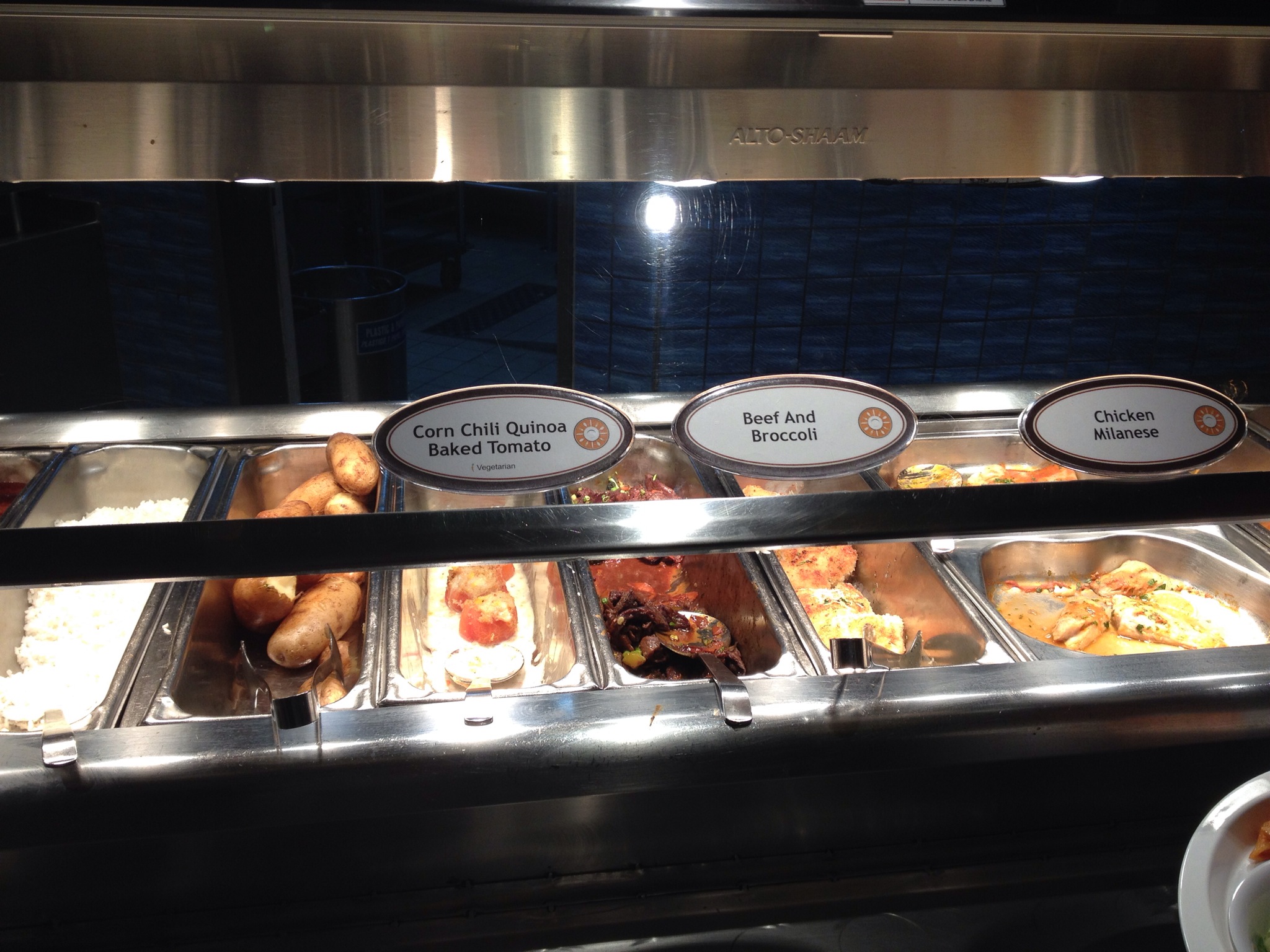 When we arrived at the port, there were three ships docked: Carnival Glory, Carnival Victory and MSC Divina .

We were “delivered” to the terminal of Carnival Glory, there we left our luggage and joined the queue to passport and safety control.

The queue was pretty long but it moved quite fast. All in all, the whole embarkation process with all the controls and check-in took us about one hour.

During the final check-in each passanger is asked some questions connected with their health. Here, at the check-in, one also gets Sail and Sign Card which is used for paying and opening the door to your stateroom. 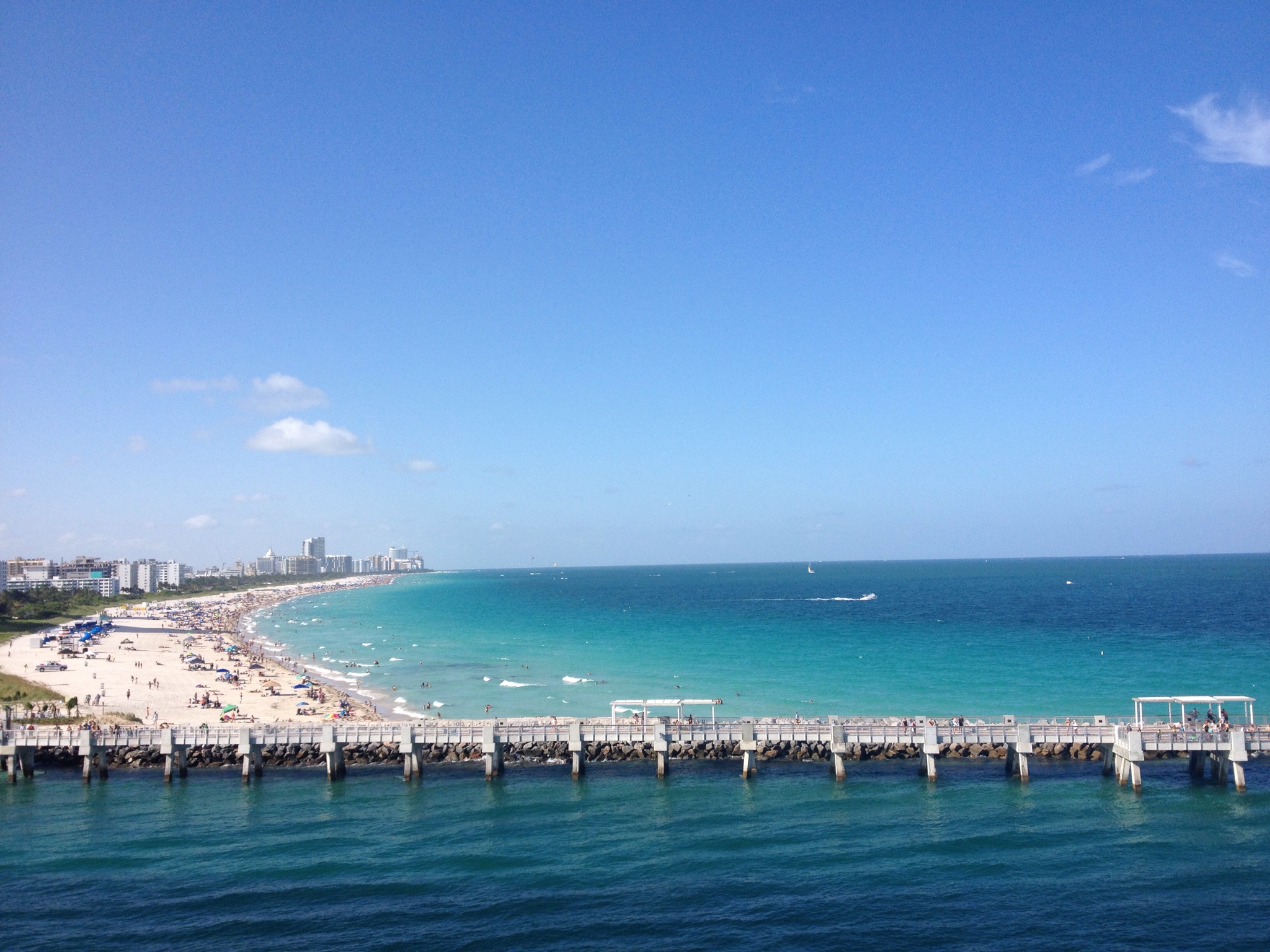 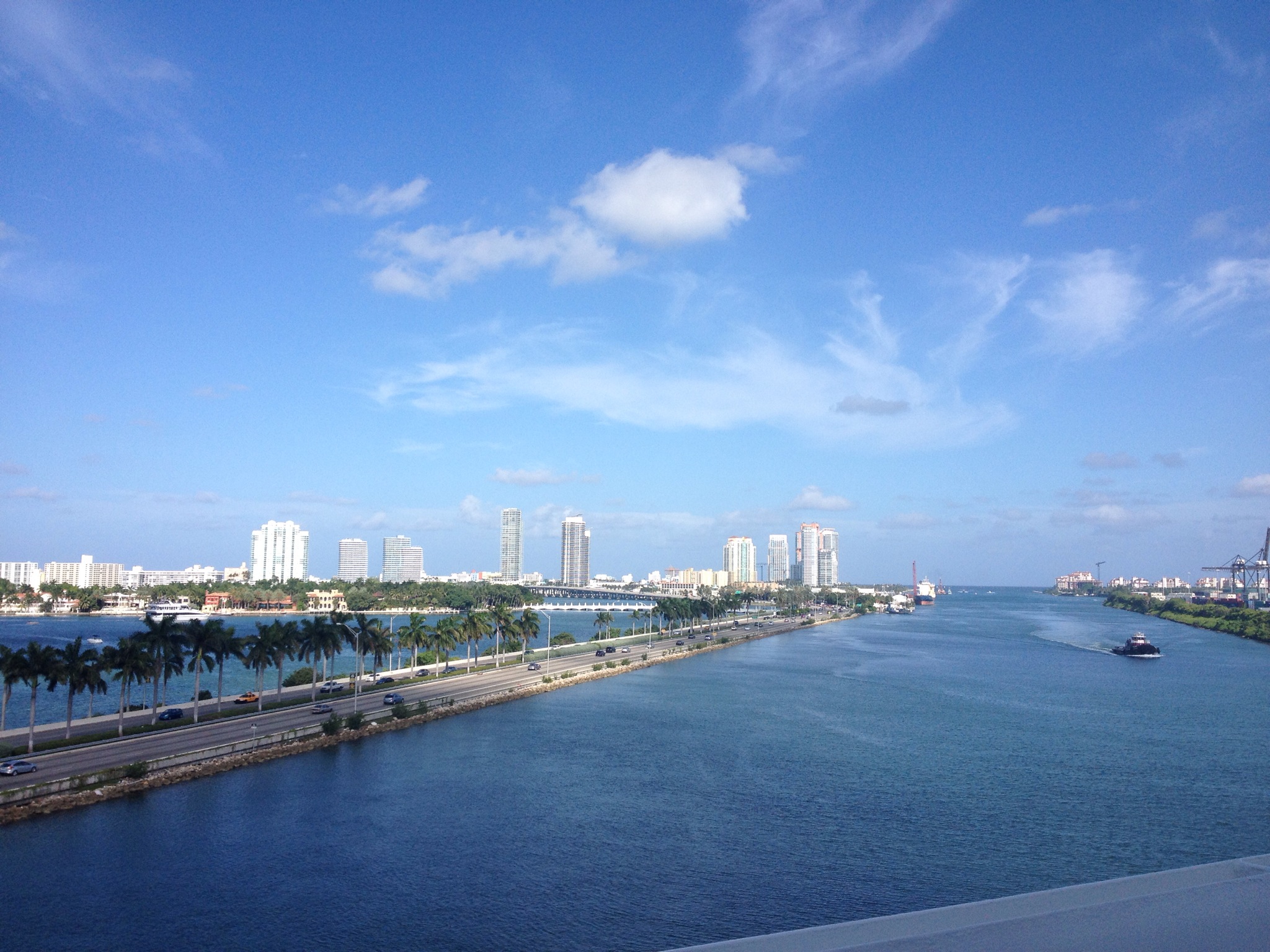 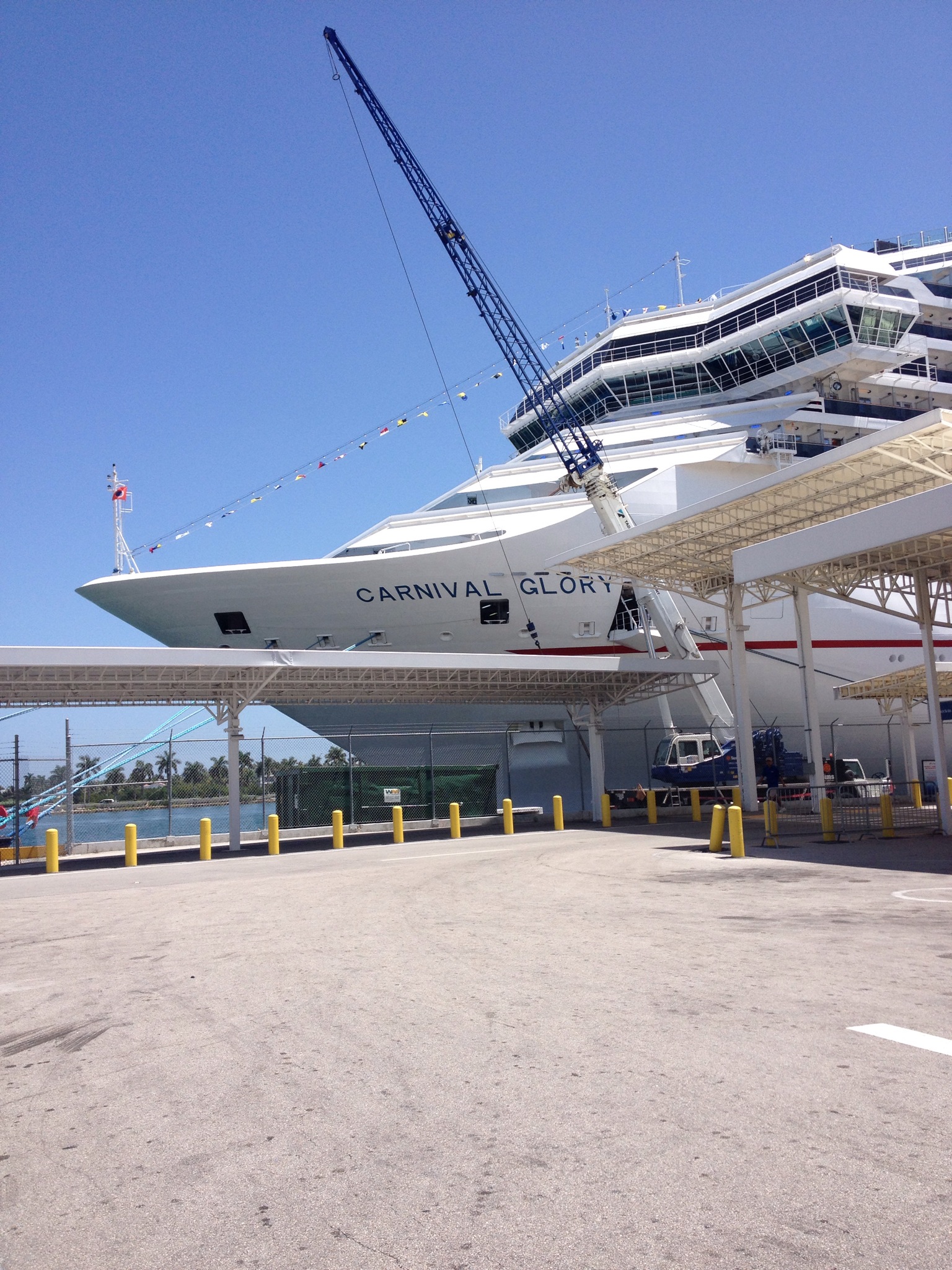 We have decided to stay in La Quinta Inn and Suites, East Miami.
Although La Quinta is not very modern and new, it is very clean and has got very fiendly and efficient service.

One of the advanages of La Quinta is a free shuttle bus to and from the airport, as well as a free shuttle to the Port of Miami.
However, when one wants a pick up from the port to La Quinta, then there is a price of $10 per person.

There is also a nice pool and free Wi- Fi . Quite important is the fact that although La Quinta is near the airport, inside the motel guests do not hear the planes. 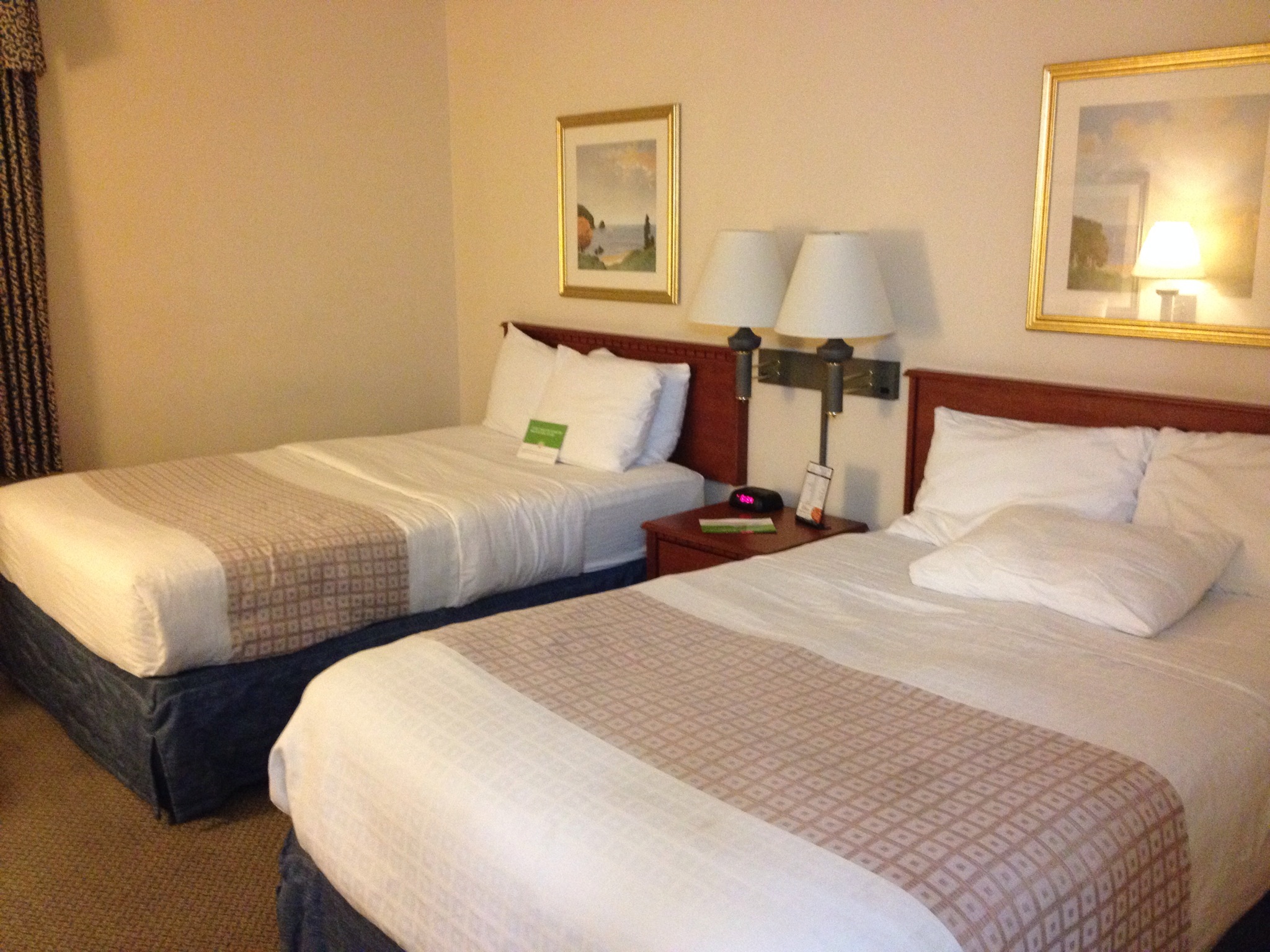 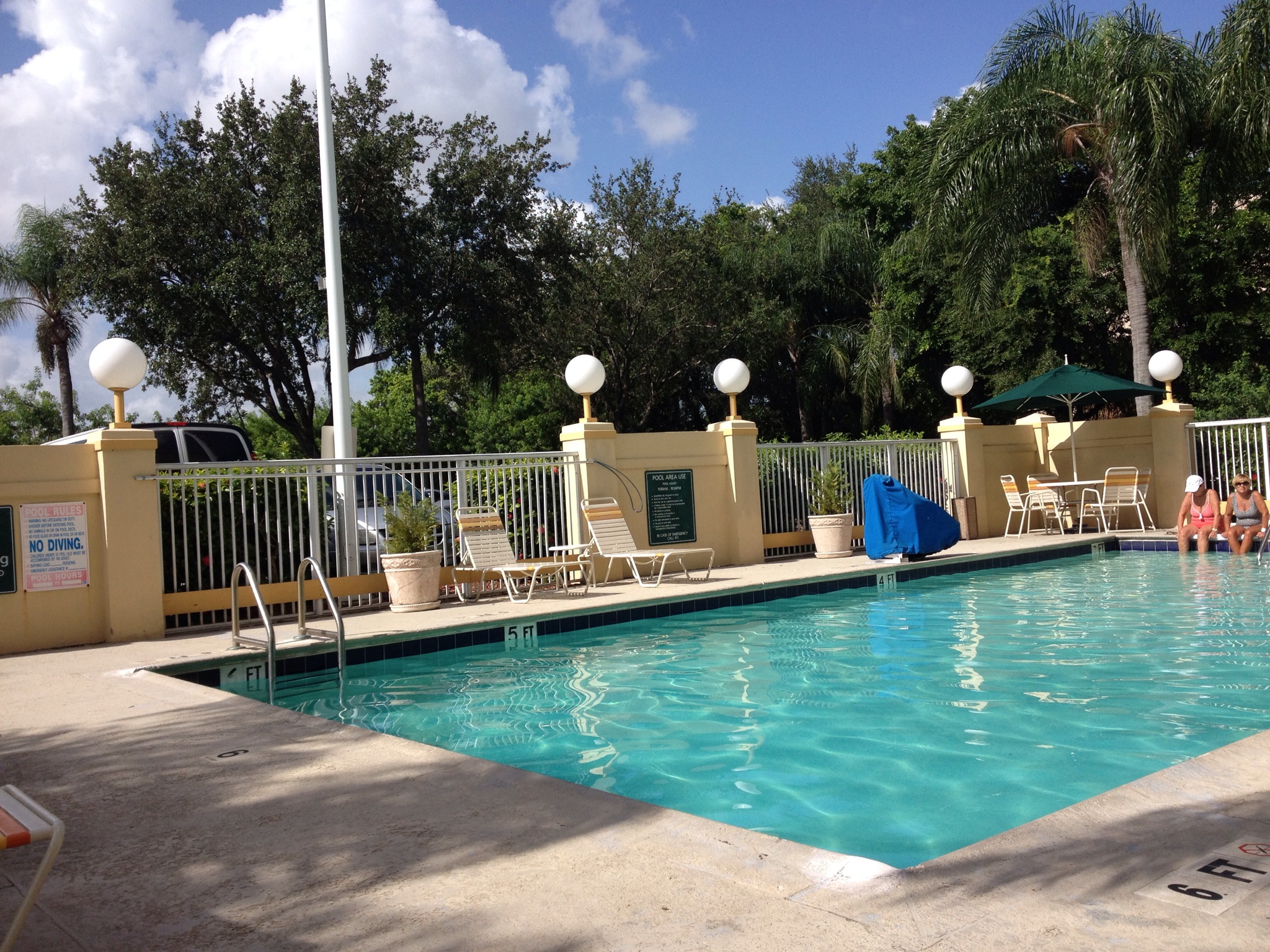 Wherever we go we hear Spanish and see Spanish baners or information written in it.
It is similar to California which was also more Spanish than English.
I do not want to sound like a racist or an intolerant person but I think the Spanish people should assimilate more when they decide to become Americans and live in the United States.
I suppose that one day the official language in the USA will be Spanish and it will happen faster than some people think.

We flew to Miami in Airbus A380. It is the largest of the Airbuses and according to the information leaflet it is very quiet and economical.

As usually, we chose Lufthansa Airlines which are very realiable and offer high standard.

Our flight was 35 minutes delayed but all in all it was comfortable. The food was delicious: we had gulash and later some chicken with rice, there was a wide selection of beverages and the entertainment offered on board was quite ok. Maybe the airconditioning was too low and we needed to use blankets.

The landing was not as smooth as usually, there were moments when the plane was flying through the clouds and was simply falling making some passengers really scared. Fortunatelly, we landed safely. 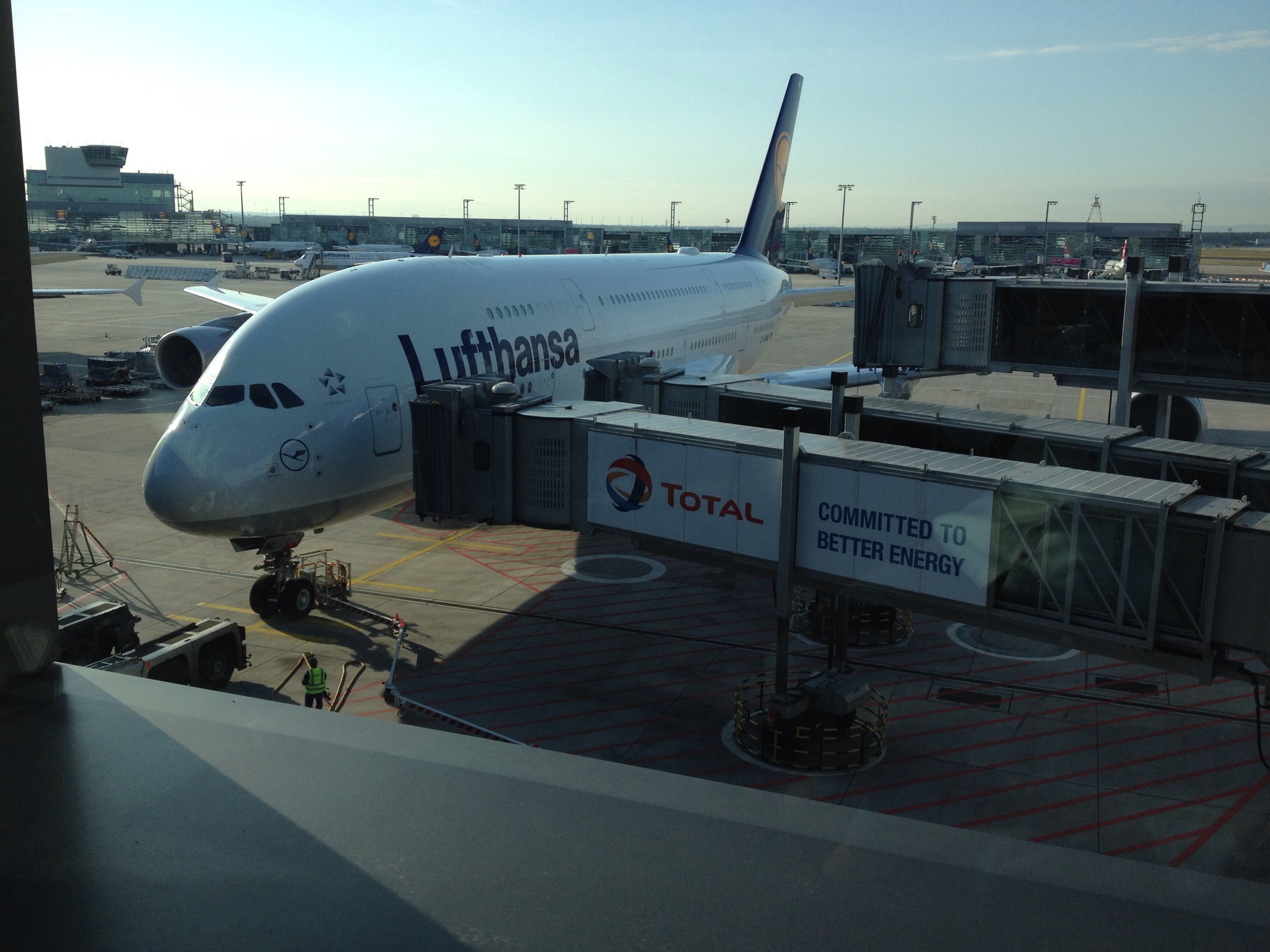